The strong winds and torrential rains that accompany a cyclone do tremendous damage to ecosystems, and this damage can make them more prone to future wildfires. As intense cyclones are projected to become more frequent worldwide, a team of researchers publishing in Trends in Plant Science on October 13 examines the links between cyclones and forest fires, how they fuel one another, and why we may see fires burning in unlikely places in the future.

“Rainforests, for instance, are wet by definition, which makes them resistant to fire. But when they are disturbed by cyclones, it can allow fire to spread into those ecosystems. To have a fire, we need three things: fuel to burn, dry enough micro-climate, and a source of ignition,” says lead author Thomas Ibanez, a plant ecologist at the French National Research Institute for Sustainable Development working with the University of Montpellier. “Cyclones can affect all three elements.”

Cyclones are storms that originate in the South Pacific or Indian Oceans, and like hurricanes in the Atlantic or typhoons in the Northwestern Pacific, they deliver heavy rains, storm surges, and gale-force winds. Strong cyclones can have winds with speeds well over 200 kilometers per hour, which can damage forests and prime them for forest fires.

“When the wind from a cyclone blows, it damages trees, bringing down a lot of leaves, twigs, branches, and logs to the ground, which make great fuel for future fire,” says Ibanez. “Wind also opens the canopy, bringing more light in the undergrowth, which can promote the growth of grasses or bushes that also make good fuel. Also, when the canopy is opened, it makes the undergrowth drier because the canopy usually shades it from the sun and locks in moisture.”

Cyclones may also indirectly increase the instances of human-generated ignition by rendering forests promising places to conduct agriculture. “This phenomenon is common where people depend on slash-and-burn agriculture or forest resources for livelihoods,” says Ibanez. “After cyclones, damaged forests may be burned to provide ash beds for planting new crops and for easier access to forest resources.”

Not only do cyclones make the likelihood of fire greater, but the fires may also change the ways that cyclones affect forests. “Of course, fire cannot directly affect the likelihood of cyclones, because the cyclones originate from oceans, but they can affect the response of the ecosystem to cyclones,” says Ibanez. “If you have a fire, it can make the trees weaker to resist cyclone winds or it can kill trees and promote the regrowth of trees that are less resistant to cyclones.”

In some regions that have had strong cyclones and fires historically, the events are a natural part of maintaining the land. “In cyclone-prone regions, there are also ecosystems that are adapted to frequent cyclones and fires, and interactions between these disturbances actually maintain original and species-rich ecosystems,” says Ibanez. “In these ecosystems, human activities that reduce fire, such as land use change and fire suppression, can threaten the stability of the ecosystem and cause biodiversity loss.”

But, as climate change increases the intensity of extreme weather events like cyclones and temperatures continue to rise, the storms are projected to reach locations that they haven’t in the past. Ibanez and his colleagues hope they can continue to study cyclone-fire interactions.

“We would like to better understand how this phenomenon varies by location. We could then predict with climate change which places would be more likely to be affected by these changes,” he says. “An important component of global change is that ecosystems do not face just one disturbance, but a mix of several disturbances, and the interaction between new disturbances can result in unexpected effects.”

Conclusion: So above is the Land in a cyclone’s wake becomes more vulnerable to forest fires article. Hopefully with this article you can help you in life, always follow and read our good articles on the website: Zliu.info 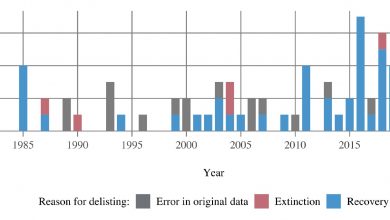 Too little, too late: Study examines why the Endangered Species Act fails