Peach OSI’s Patriot OS is a vibrant example of how a software developer can create a distribution that stands apart in the crowded Linux OS field of lookalikes.

This evolving Linux OS distro, once known as “Peach OSI” but now called “Patriot OS,” delivers a Linux computing platform that injects new functionality and offers something different. It is worth checking out, especially if you want to supercharge older computers.

Patriot OS has a limited variety of background images that all reinforce the Patriot theme.
– click image to enlarge –

I initially reviewed Peach OSI as a fledgling distro based on Ubuntu Linux when U.S.-based developer James Carpenter released the first stable version in the summer of 2014. In the crowded Linux OS field, it was rare to find a newcomer that was not like any of the others. It was also rare to see a first stable release offer the kind of smooth performance and expansive feature set Peach OSI offered.

Since then, the Peach OSI website has remained a distribution center for a series of Linux distros that serve several uses. “Peach OSI” is the name of the developing entity. It comes from Carpenter’s location in Georgia, the “peach” state.

“OSI” is an acronym for “Open Source Initiative,” a completely separate entity. Carpenter and Peach OSI both are members of the initiative.

“Inasmuch as Ubuntu supports their offerings, I do support those who elect to continue to use the deprecated versions. I do not, however, continually create updates in excess of what Ubuntu provides as updates,” Carpenter told LinuxInsider.

I liked the original Peach OSI Linux distro enough to give it my top rating — five stars — but Patriot OS has a few updated features that make it more modern and even more useful. It was developed to be a complete operating system out of the box, with no configuring needed. Patriot is that and more.

Peach OSI was developed for newcomers to Linux and computing. Its design made it inviting to those migrating to Linux from the macOS platform.

Its XFCE-only desktop grew into an offering that includes the Cinnamon and MATE desktops. However, Carpenter shifted back to the XFCE default desktop for Patriot OS.

With its speed and flexibility, the aging lightweight XFCE desktop serves older hardware well. Carpenter added some functionality that gives it fresh appeal. 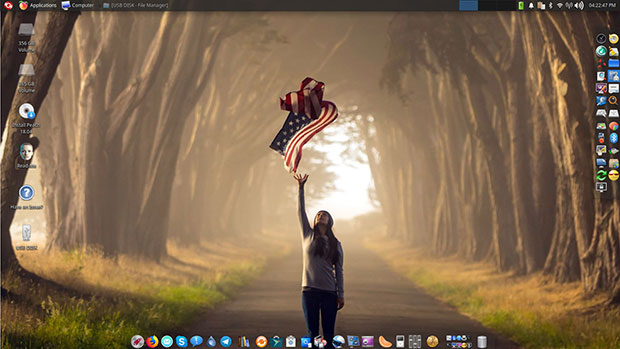 Patriot OS has a more advanced desktop functionality that results from its full-function panel bar across the top of the screen and a customizable dock bar at the bottom along with a slide-out side panel from the right screen edge.
– click image to enlarge –

Patriot OS is a fully loaded release that exceeds most computer users’ expectations. Its desktop environment is lightweight but very configurable. This distro can be as heavy or as light on software as your needs require.

A misunderstanding often occurs regarding the difference between Peach OSI and any distribution title offered by Peach OSI, Carpenter has acknowledged. For example, DistroWatch.com, which tracks Linux operating systems, currently lists Peach OSI as an active distro.

Actually, the Peach OSI distro is no longer available, as the latest version is called “Patriot OS” — but Patriot OS is not listed on DistroWatch or any other software outlet.

In 2018 Carpenter was forced to scale back the number of distributions he could maintain. He compiled the best features of all Peach OSI’s previous offerings into one distribution named “Patriot OS.”

The developer drew an analogy to Microsoft and the Windows OS.

Carpenter’s original goal with Peach OSI was to create a way to quickly deploy a Linux system to his families, friends and computer clients in any situation where traditional operating systems were creating more issues than they were solving.

The various Linux OSes he developed gave these different groups an option that was more reliable, more secure and most importantly — easy to implement and use, he explained. He wanted to spare them from having to pore through complex user manuals.

“Most people are not interested in beginning any new system where an entire manual is needed to begin to use a computer. I knew that the standard installs of Ubuntu, Xubuntu or similar distros would never work,” he said.

Carpenter was committed to creating a distribution that was as fully set up and ready for immediate usage as he could possibly make it. He preconfigured as many of the Peach OSI distros as possible.

He included many functions that most users never will be aware of existing in the OS. He tried to make the Linux system as GUI-friendly as possible, so users would not have to use the terminal except for the most basic of commands.

Carpenter’s tweaking of the XFCE desktop has given me a renewed interest in what once was my favorite computing environment. He prefers it to GNOME and believes XFCE improves upon the functionality of the Ubuntu base that runs GNOME.

Peach OSI Patriot OS retains the right-click cascading menu anywhere on the desktop that is standard in the XFCE design.
– click image to enlarge –

Patriot OS comes with a large inventory of useful Linux computing applications that should meet most users’ needs as is. The Software center provides a warehouse of software to download for free.

The desktop view sports a look of traditional Linux, thanks to the panel bar residing along the top edge of the screen. The system icons and notification tray are located at the far right. The far left holds the log out button and the main application button.

A search window sits at the top of the application menu. Start typing a program’s name to locate an application easily, without rummaging through the two-column menu of categories and lists.

A well-populated docking bar on the bottom provides quick launch access to a hoard of productivity applications and Web services. This dock is very customizable. A menu button at the far left of the bottom dock launches a GNOME-style full-screen application catalog.

Push the pointer to the middle of the right screen edge to launch a pop-out panel loaded with even more system tools and handy maintenance apps and settings menus. You also can right-click anywhere on the desktop to access a cascading menu that provides access to applications, system settings and more.

It’s likely that XFCE always will be Peach OSI’s dominant choice for Window manager functions, according to Carpenter. However, he has had many requests for a version of Peach OSI in both Cinnamon and Mate.

“As a way to sort of appease those users, we have added a login that provides the initial capabilities of both Cinnamon and Mate,” he said.

The individual users have to complete setup of both of those window managers to suit their needs in that regard, he added. The issue here is with the 4-GB ISO limitation.

“Completely setting up three different window managers would extend the ISO to well over the 4-GB threshold,” Carpenter noted.

The installation ISO is already at 3.8 GB. That results in part from the number of Patriot OS applications preinstalled.

Another impressive characteristic of Patriot OS is the completeness of its unique software collection. This distro contains some novel but useful applications.

For example, Patriot OS has a handy maintenance tool that runs automatically in the background as part of the system update process. Start the procedure by clicking Ubuntu Cleaner in the menu. Use this application after completing updates or adding software to the system.

This is not essential, but it frees up space on your hard drive. Leave at least one older kernel installed in case a newly installed kernel causes trouble.

The Discover Application Store provides the usual Ubuntu packages plus Flatpak and Snap applications. Each time you open the Discover Store, it searches for software and system updates.

Also new is a reworked version of an abandoned application named “RadioTray.” It is ready to play Internet radio via a small icon in the top panel right beside the sound icon on the right end of the upper panel. Carpenter added a sound equalizer called “Pulse Effects.”

Yet another innovation is MyCroft, a Linux version of artificial intelligence. You can install it from both the Software Center and the Discover package manager.

A screensaver feature feeds live data and news retrieved from the developer’s website. The screensaver is set to turn on automatically after 20 minutes of inactivity. You can access the screensaver at any time by pressing the CTRL-ALT-L keys simultaneously.

Patriot runs on a large collection of older computers. The bare minimum requires a 1 CPU core machine with as little as 2 GB of RAM. This gives you a slow performance.

Patriot also is set up to run Windows applications. That requires at least 60 GB of storage on your hard drive.

The Patriot OS installation has a default configuration of three available workspaces or virtual desktops. You can add many more or reduce the number by going to the system systems/workspaces menu.

You can navigate to your available desktops by clicking on the workspace switcher app in the right end of the top panel. Right-clicking on the upper window border lets you send an open application to another workspace. Using the CTRL/ALT + arrow keys also lets you navigate among workspaces.

Patriot runs as a fully installed OS on a hard drive or from a DVD or USB drive as a portable operating system. If you are new to Linux and want to avoid downloading and creating the installation media from the ISO, you can pay a minimal fee to receive Patriot ready-to-go on a USB drive.

Peach OSI’s Patriot OS is a “peach” of a Linux distro for any user skill level. It is a great choice for Linux newcomers. It is an even better choice for Linux vets who want something a little different.

The only thing about this distro that quickly wore thin for me was the Fireworks sound that plays as the system starts. That is easy to turn off, however. Go to Settings -> Session ->Startup -> Application Autostart. Uncheck the box next to Autostart Patriot System Sounds.

The ample inventory of background images is filled with patriotic scenes. Adding other images is a bit more involved.

Want to Suggest a Review?

Is there a Linux software application or distro you’d like to suggest for review? Something you love or would like to get to know?

Pleaseemail your ideas to me, and I’ll consider them for a future Linux Picks and Pans column.

And use the Reader Comments feature below to provide your input!

Conclusion: So above is the Patriot OS Provides Revolutionary Computing Convenience article. Hopefully with this article you can help you in life, always follow and read our good articles on the website: Zliu.info

A Cure for What Ails Social Media

ARM vs. x86 Battle Royal: Why and How ARM Is Pulling Ahead